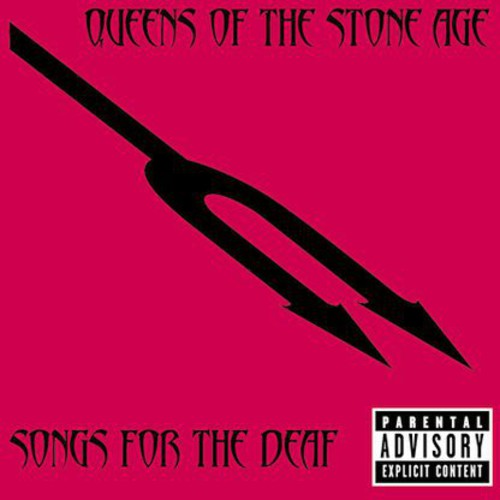 The grapevine had it that the Queens lived in Turk ish pashas out among the cacti and Joshua Tree of the California hinterlands, corrupting unsuspectin g music fans with their decadent lifestyle and trance-inducing music. Now they've returned to make the ultimate "Robot Rock" record of the 21st Century. "Songs for the Deaf."

Queens of the Stone Age masterminds Josh Homme and Nick Oliveri still hate mainstreamrock radio with a passion. The duo's third-and second for major labelInterscope-record Songs for the Deaf has to be the most blisteringindictment of corporate airwaves since Elvis Costello raised his mighty pento write "Radio Radio." And despite the presence of a handful of insanelycatchy (and extremely radio-friendly) songs, Homme and Oliveri actually go outof their way to mock FM radio in a series of hilarious interludes that bracketthe record. "KLON: we play the songs that sound more like everyone elsethan anyone else," exclaims one giddy announcer. "KRDL: we spoil musicfor everyone," gushes another. And when singer Mark Lanegan explains howGod is living on the airwaves on "God," you can practically hear theicicles forming on his lips.

Still, the record's loose concept is more of a red herring that anythingelse. And its title is also somewhat of a misnomer; Songs for the Deafis-whether it's destined to fall on deaf ears or not-a recordfor the multitudes. Homme and Oliveri have really come a long way since thelast Queens record (2000's less cynical, but more abrasive R), letalone their salad days in the embryonic stoner metal outfit Kyuss. Songsfor the Deaf has incredibly deep pockets, from the anthemic rock of "FirstIt Giveth #1" to the whirlwind punk of "Six Shooter" to the swirlingStrawberry Alarm Clock (no, really) psychedelics of "Another Love Song."And Mark Lanegan-now a card-carrying member of the group-manages toaccomplish the very thing that eluded him during his tenure as the lead singerof the Screaming Trees: he makes his vocals sound like they actually fit againstthe group's nuanced sonic backdrop.

Of course, half the fun is hearing how the guests Homme and Oliveri have broughtinto the fold push and pull the QotSA sound in unexpected directions. Dean Weenand frequent Desert Sessions collaborator Pete Stahl strap on their party hatsfor a couple of songs, but Dave Grohl is the biggest gate-crasher here. He reportedlypushed back the release of the next Foo Fighters album in order to play on allbut one of the record's tracks and tour with the group. Does it even needto be reiterated how great Grohl is behind a drum kit? His solo on "SkyIs Falling" isn't only the single best thing on the record-it'sa reminder of how the QotSA laboratory formula brings out the best in everyoneand a clear example of why Grohl might want to consider giving up his day job.